Yu Televentures has launched its new flagship smartphone, Yu Yunicorn. Its forerunner, Yutopia looked promising but did not meet the expectations of people. With Yunicorn, Yu Televentures has paid attention on the key areas like software and services. Priced at the range of Rs. 15,000, Yunicorn has to prove itself amongst all other superior mobiles in the same range like Xiaomi Redmi Note 3, Lenovo Zuk Z1 and Moto G4 Plus. Here we are mentioning Yu Yunicorn Specs and Review followed Pros and Cons 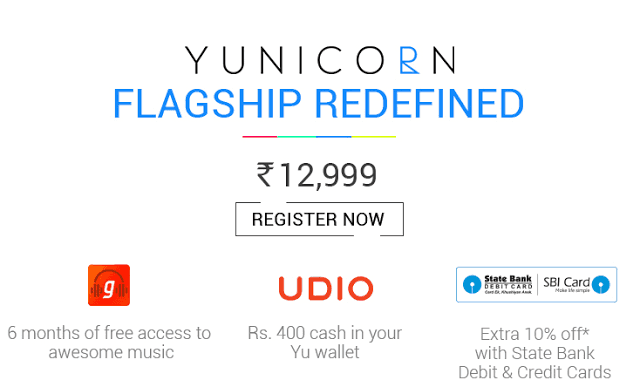 Yunicorn sports the best build and design than the other Yu mobiles. Its metal unibody and the rear panel design give an aesthetic touch to the mobile. Yu Yunicorn Specs measures 8.5 mm in thickness and weighs 172 grams. The front of the mobile looks quite similar to the Oppo F1 Plus and the rear panel reminds us of Redmi Note 3.

The Yu Yunicorn Specs of mobile features a 5.5 inch full HD display with sharp pictures and text. The display is protected by the Nippon Electric Glass (MEG). The front panel houses the notification light at the top and the physical button integrated with a fingerprint sensor at the bottom. The brightness and legibility of the mobile is fairly good in sunlight. The hybrid dual SIM tray is placed on the left while the volume and power buttons are placed on the right. The headphone socket is placed on the top while the USB port is placed at the bottom. The mobile sports a monospeaker but the speaker grilles are placed on either side of the USB port. The mobile packs a 10W power adapter, data cable and an in-ear headset.

Yu Yunicorn specs is powered by a powerful octa-core MediaTek Helio P10 SoC coupled with 4GB of RAM. The 32 GB internal storage can be expanded up to 128 GB via an external microSD card. The connectivity options include Wi-Fi b/g/n, Bluetooth 4.1, USB-OTG, and GPS while the NFC and FM Radio are missing. 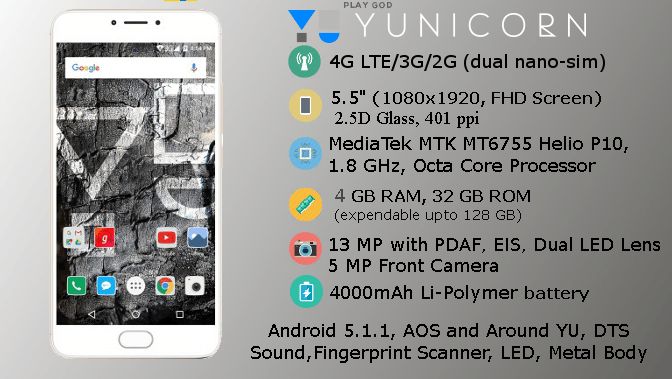 Yunicorn runs on Android Lollipop 5.1.1 but Yu has promised a Marshmallow update in a month with an improved app drawer design. The launcher features the Around services of Yu in the home screen. The new Around services in Yunicorn includes Yu Wallet powered by UDIO for recharging your mobile, DTH, data card. Yu is also working with Lybrate to get doctor’s assistance with your phone. The mobile also has its MiMedia social cloud pre-installed for unlimited storage of media files.

The pre-installed apps include the conventional file manager, sound recorder, Yuniverse browser and Yu’s cloud service to backup the SMS, Whatsapp data, call logs and contacts. Yu has promised that it will replace all the available music apps with Gaana music player while launching the mobile.

Yunicorn’s multitasking ability is quite good and the phone doesn’t heat up while gaming or charging. The AnTuTu benchmark gave us a score of 33,903 while GFXbench returned 15fps in the T-Rex test. The phone works well on 4G network too. The rear panel is quite slippery and you may drop it if handled careless.

The 13 MP rear camera comes with dual tone LED flash and five-element lens with EIS. Daylight pictures are good but lack details when cropping images. The HDR mode has ghostky effect on the photos similar to Yutopia. The serious issue with Yunicorn’s camera is the slow focusing system which takes a full second to focus and one or two seconds to save the image. The images aren’t that clear and sharp in dim light either. The features include panorama shot and picture-in-picture. The quality of video is decent. You get a slow motion mode but its resolution if just 640p. The front camera is of just 5 MP.

Yunicorn is backed by a non-removable 4000 mAh battery that can last 14 hours, 46 minutes during video loop test. With regular usage, the mobile can last for one day and a half or even up to two days. The battery life can also be extended furthermore if you limit your games and 4G usage. The battery doesn’t have quick charging option.

Yunicorn is priced at Rs. 12,999 and proves worth your money. 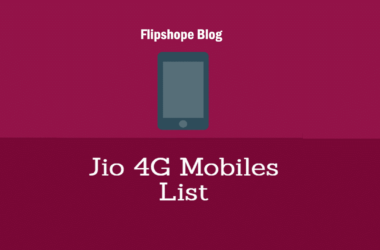 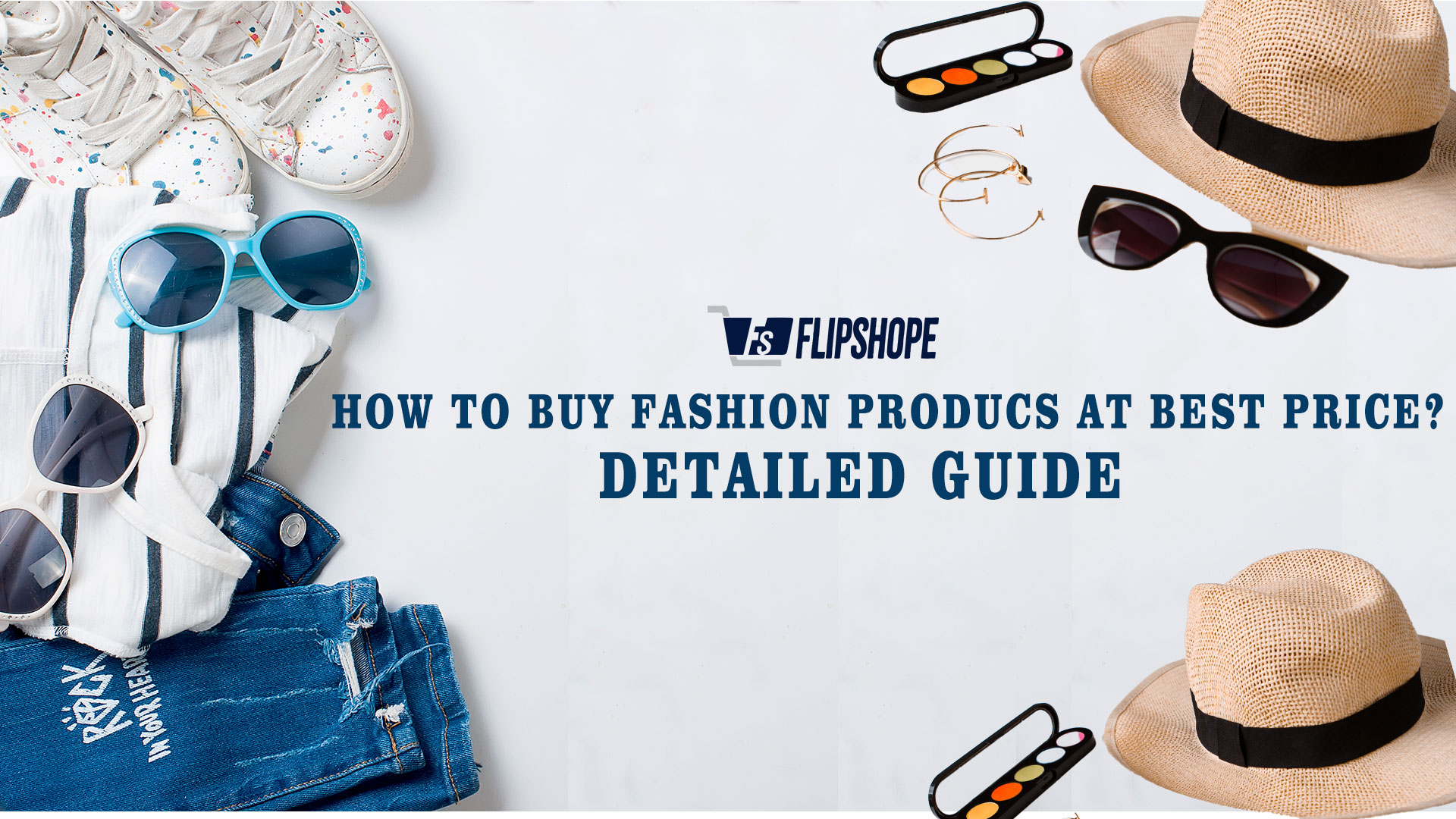 How to buy products from Top Fashion Brands at the best price? Step by Step guide

When it comes to getting a discount on fashion trends, there is a perfect time to buy practically… 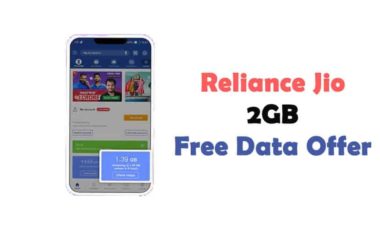 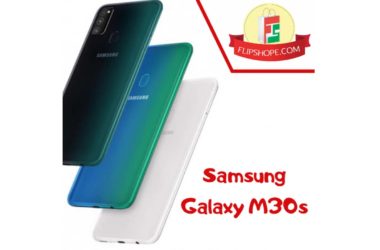 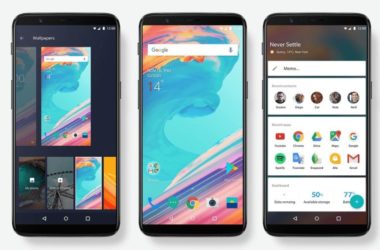 Here we are in the final quarter of 2017, this is the business time for every mobile brand.… 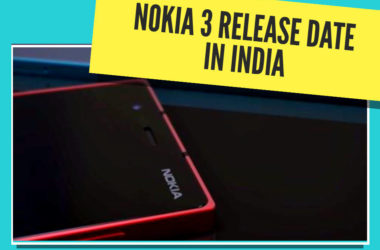